Board of Education Honors Students, Athletes 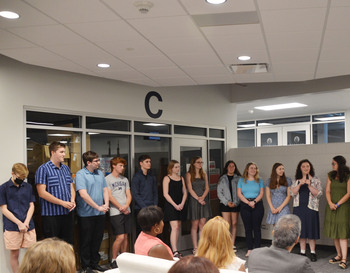 Board of Education Honors Students, Athletes

On Monday, June 13, at the Regular Meeting, the Berkley Board of Education honored the top 5% of the BHS Class of 2022, track and field athletes, the varsity tennis team and outstanding senior athletes.

The Board recognized the top 5% of the BHS Class of 2022. Each student in this grouping has a GPA of 4.3 and higher.

The Board honored two junior track and field athletes for competing at the State meet - DaKya Cunningham and David Rolands. DaKya competed in the 100m and 200m sprints and finished 6th in the 100m and 5th in the 200m, earning her All-State status for both events. In addition, DaKya was the league champ and county champ in the 100m and 200m races, earning her All-League and All-Region honors. David competed in shot put, and finished 10th in the state, with a throw (and personal record) of 48 feet .75 inches. In addition, David was the county champ in the Shot Put and earned All-League and All-Region honors.

The BHS Girls Varsity Tennis Team qualified for and competed at the State Meet. At the State Championships, the team finished in 12th place and the team finished in 2nd place at the OAA Championships! In addition to their accomplishments on the court, this team earned Academic All-State with a team average of 4.07 GPA, after surpassing the 3.25 GPA requirement and setting a school record for the highest team GPA average in school history. Five senior players were also recognized for earning individual Academic All-State Awards: Annabel Bean, Payton Asher, Lola Belchinsky, Ellie Kubicki and Aurora Sousanis.

The Board of Education Honored Aurora Sousanis and LaVaughn Veasey for being outstanding senior athletes. Aurora is a 4-year varsity tennis player and a 4-year member of the girls basketball team. While participating in two sports each year, Aurora maintained a 4.0 GPA or higher throughout her high school career. Aurora was also the recipient of the Berkley Athletic Boosters Roz Warren Scholarship for outstanding female athlete. LaVaughn is a 4-year varsity swimmer. LaVaughn qualified for the state swim meet for all four years and, as a senior, competed in the 50 meter Freestyle, 100 meter Freestyle and 200 meter relay. LaVaughn was also the recipient of the Berkley Athletic Boosters Bob Jarvis Scholarship for outstanding male athlete.