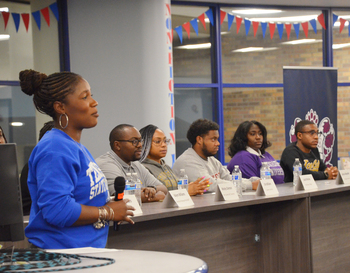 HBCU night included an open house with colleges, sororities, fraternities and financial aid programs. Students and families were able to meet with representatives from these groups and learn more about what they offer. After the open house families and students were welcomed into the library media center for a question and answer panel consisting of panelists from seven different HBCUs. Mrs. Coleman (proud Tennessee State University Tiger alumni) was the moderator for the panel.

To kick off the panelist portion of the event, Mrs. Coleman shared the following about HBCUs. “HBCUs were founded at a time in American history where slavery was just ending and there was no space for our Black ancestors to learn. Out of that, HBCUs were born, which are still thriving and surviving in our society today. There are still 101 HBCUs that remain and continue to nurture and develop the top scientists, scholars, engineers, doctors, and educators in our nation and world,” she said.