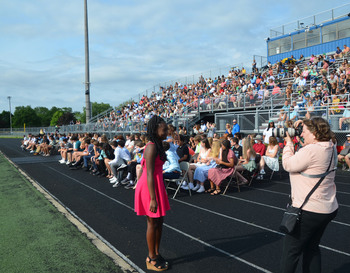 8th grade Anderson students were honored on June 14 for completing their middle school career. Students arrived at school ready for their ceremony with family and friends and celebrated outside on Hurley Field. Michael Ross, AMS Principal, addressed the 8th graders, sharing well wishes for the students. In addition, the student body said farewell to retiring Assistant Principal Jim Cowdrey. Special awards were given out with scholarships, students were recognized for special academic achievement and three students addressed their classmates. When the recognition from the podium was complete, students had their names called one by one and were celebrated as graduates of Anderson Middle School.

On June 14, the Adult Transition Program held a graduation ceremony for the six students who completed their program this year. During the ceremony, ATP Principal Jennifer Gebbie, Special Education Supervisor Nic Farquhar and Student Services Director Heather Lackey spoke to the students and parents. In addition to the speeches, the graduates and their families viewed a video that featured well wishes from their classmates and teachers. Mrs. Farquhar presented the plaques to the graduates as part of the ceremony. Everyone enjoyed a reception following the festivities.

Norup 8th graders gathered outside on June 14 to hear words of wisdom from Principal Paul Yowchuang and to receive their end of year certificates. Special recognition was given to students who spent their entire educational careers at Norup, Kindergarten through 8th grade, and to students who received special Norup awards for exemplifying the IB traits. Mr. Yowchuang also honored the founder of the Berkley African American Parent Network, Khadija Walker-Fobbs. Each member of the class was given their own moment as they received certificates and a handshake from Mr. Folmar, counselor, and Mr. Yowchuang, principal. After the ceremony, Norup families formed a tunnel as Mr. Yowchuang led the 8th graders through a final walk through Norup.

On June 15, Pattengill Elementary 5th graders said farewell to their elementary school in a morning promotion ceremony. The ceremony began with a whole-school clap out. Pattengill students and staff lined the halls and cheered on the 5th graders as they exited to the playground one last time. At the promotion ceremony, students each received certificates as they shook hands with their 5th grade teacher and Principal Shamika Womble. After the ceremony, students posed for photos with classmates and teachers before heading to the 5th grade party.

On Tuesday, June 14, the Rogers Elementary community said farewell to their 5th graders and retirees. The morning began with a clap out parade - the retirees led the parade in a classic car and the 5th graders followed behind on foot. Students and families lined the streets with farewell signs, cheering for all those who were leaving Rogers.

After the parade, the student body settled into the main entrance area outside and the school gave their gifts to the retirees. Students sang the Rogers song, modified for a goodbye to Principal Beth Meacham and their “Wish You Well” song to retiring secretary Natalie Hill and paraeducator Michelle Thompson. The PTA presented each retiree a gift bag and student artwork with thumbprints from each child. In addition, the PTA gifted the Rogers Media Center a rocking chair in honor of Mrs. Meacham.

After the retirees were honored, the 5th graders had a chance to enjoy their last moments at Rogers. Students were recognized for their participation in safety squad, the recycling club and had a chance to read their personal quote to family and friends who were gathered for the ceremony.