We have received and/or discovered various historical accounts of the early days of the Berkley School District.  Although we have no way of verifying the specifics or accuracy of these histories, they do make delightful reading. We hope you enjoy them as much as we did.

The Berkley School is first mentioned as a part of the Royal Oak Township School District #7 in the year 1840. The school was housed in the Blackmon School, at the corner of Coolidge and Catalpa, from 1840-1901. Teachers who served in this school at various times included Mayme Cannon, Julia Russell, Emma Brooks, Mary Brooks, Eva Hill, Anna Richards, Clare Erb, Mabel Baldwin and Josephine Denning.

In 1901, a new school building was established at the northeast corner of Coolidge and 11 Mile, named South School. This school existed until 1920 when it was converted to a dormitory for teachers. Among the teachers who served in this building were Matilda Story, Mabel Pearsall, Minnie Eseman, Margaret Brondige, Loinera Blunt, Leeta Brown, Edith Eseman, Ethel Phillips, Gladys Hansen, Hazel Teeter, Miss Robinson, Maude Moore, Beatrice Miller, and Aileen Clark.

September of 1918 brought a 34-0 vote to change from a primary district to a graded school district with pupils housed in a temporary structure on the corner of Berkley and Catalpa while the Berkley School was built. The original, temporary building was sold to the Berkley Community Church and removed from the site in 1922. The high school section was added in 1926.

In 1921, the School Board bought a block of property on Bacon, between Beverly and Wiltshire and built a four-room school building named Angell School.

In 1925, "sister schools" Pattengill and Burton, were constructed and occupied even before completion.

The depression years were hard on the district as noted by the fact that in January of 1930, all pupils were placed on half-days, half of the faculty (26) were dismissed, and bus service, domestic science and gym were eliminated from the curriculum.

In September of 1931, both Burton and Pattengill were closed for financial reasons. The buildings were used for storage and/or leased to parochial schools. Burton reopened in 1941 and Pattengill in 1943.

In 1949, following the post war "baby boom", Berkley High School opened across Catalpa from the Berkley School. In 1951, Tyler (Avery) and Oxford Schools were added, and in 1952, Hamilton (Rogers). The addition of junior high schools came in 1956 with Anderson and in 1957 with Norup.

Tyndall became the last elementary school addition in 1965 and with declining enrollment, was converted to a community education facility in 1977. 1979 brought the closing and demolition of the Berkley School.

Following is the administrative trail of the school district. Please understand that this document is an attempt to trace the records, but is garnered primarily from two documents (The History of School District No.7, 1840-1946 by Audren Petaja and Burton School History by D. Karshner), as well as perusal of old personnel records, and a great deal of hearsay.

A gap remains in the office of superintendent for the period 1919-1922. It is not known if there was a superintendent since it was a small K-6 district. Also, no attempt has been made to trace any instance of "acting" administrators since the records are far too vague. This is all to say, that this was a patchwork project, undertaken from a personal interest, and contains no guarantee of historical accuracy since the sources provided no such guarantee.

The Special Education Offices, located in a residential property at 2077 Oxford, were moved to Central Office in the summer of 1999.  The property was sold to the City of Berkley for $82,500.

In the fall of 2002, the district "Restructured for Success."  Avery Elementary became an early childhood center serving children from six weeks of age through grade 2.  Norup Middle School was reconfigured to serve students in grades 3 - 8, and is now known as Norup School.   These changes were the result of declining enrollment at both Avery Elementary and Norup Middle School.

During the 2005/06 school year, budget concerns led to "Downsizing by Design" which included the sale of the Oxford property to Eli Construction, LLC for $1,080,000 and moving the central office staff  from Oxford to Avery School, located in Oak Park, during the summer of 2006 .  The Oxford building is slated to be demolished during the summer of 2007 and homes built on the site.  The Downsizing plan also called for Norup to be reconfigured.  The remaining Avery K-2 graders moved to the new Norup International School in the fall of 2006 - making it the first K-8 International Baccalaurete school in the county.

In 2018, both the Tyndall and Avery early childhood centers combined into one at the former Avery Elementary School site. This new center opened in August 2018. The Tyndall center will then be renovated to house only the administrative staff beginning in January 2019.

The first written record that we have of the present Berkley Huntington Woods district bears the date 1867. That year the township treasurer turned over to the treasurer of the school district the following sums:

That year the only expense of the district was $60 paid to the teacher for the summer term and $120 for the winter term. At that time the janitor service was very inexpensive -- $1.00 being paid for the annual cleaning. The teacher, with the help of the older pupils, swept and dusted the building daily. $4.50 was paid for building fires for the year. Wood, of course, was the fuel used, the annual cost ranging from $10 to $18. Our slate blackboards bordering each room would have seamed a luxury at that time for in 1877, $10.25 was paid for a dictionary and for painting the blackboard.

The amount of business transactions was very small -- one double page taking care of all accounts for two to four years.

To give us an estimate of prices in those times, records show that in July 1877 when school opened, 85 cents was paid for a box of crayons, a water pail, a box of matches, and a broom. How much more than the broom could we get today for $.85; and what horrors that water pail would give Miss Shotwell.

Wages evidently had begun to increase for in 1886, $7.50 was paid for building fires, -- almost twice what it had cost in the earliest records. But in 1890 Miss Emma Brooks, the teacher, built the fires herself and received $2.00 a year for it. In 1891 and '92,some one must have been interested in the comfort and appearance of the schoolhouse as $4.40 was paid to bank the building for the winter; and in the spring $12.00 was paid for repainting the schoolhouse. This $12.00 included the cost of the paint.

The sister of Mrs. William Sullivan of Royal Oak was a teacher in the school about this time. She says the building was on the east side of Monnier Road -- now Coolidge Highway -- that the desks were homemade and built to accommodate two scholars and that they were handsomely carved with initials and pictures. There was no teacher's desk and the only blackboard was about three feet square. Coats and hats were laid on shelves in the back of the room. As near as Mrs. Sullivan can remember the school stood between what is now Dorothea and Sunnyknoll. So our present Berkley High School building is not far from the original location.

In 1893, Miss Clara L. Erb, now Mrs. Clara Kidder of Royal Oak, taught the school. Mrs. Kidder was in the tenth grade at the time and taught for three months for the sum of $50. She rode to school with the milkman.

From 1893 to 1896 Joseph Rauge acted as clerk. The same book had been used to keep accounts in for over 25 years; (only a few pages having been used) and at the expiration of his term of office, we find this bit of humor:

"Be saving with this book so it will last 340 years more.”

For teaching the months of May, June, and July, 1896, Miss Mable Baldwin of Royal Oak received $50. Miss Baldwin was attending High School and as that closed in April, it gave her an opportunity to teach the summer term in District #7.

About this time the site at the corner of the Eleven Mile Road and Coolidge "The Dormitory" was built on for in 1902 the old schoolhouse was sold to a Mr. Lucas for $12. The first record of tuition being received was in 1899 when $4.50 was paid to the district. The first record of paying transportation to a board member is in 1901 when $2.00 was paid Charles Fuellgraf for a trip to Oxford. In 1902 people of the district voted to insure the building – cost being $8.10. New furniture was purchased, in 1902 to the amount of $104.60. No doubt the initials and pictures on the desk tops necessitated this expense.

Even in those times the school board found themselves custodians of articles no longer needed to maintain the school for in 1903 Fred Puvogel paid the district $1.90 for a pump.

The first money spent for reading material was in 1903. Twenty dollars was spent for a chart. All books, of course, were purchased by the children.

In 1908 someone must have felt the need for beautifying the schoolyard. Perhaps the teacher asked for trees for Arbor Day planting, for $7.50 was spent for shade trees. The following year a flag was purchased. This is the first account of one being raised on the building. That year $2.00 was paid to clean the yard and pile up the wood.

By 1910 a need was evident for higher learning as $20.00 was paid for tuition to Royal Oak. Two years later students began to attend Birmingham High School as well.

How modern the district must have felt in 1911 when the sum of $88.10 was paid in February for a heating stove. At the next annual meeting the old stove was sold for $1.50.

The new heater must have been the cause for a change in fuel for from 1912 and coal was used as well as wood. Mellen Wright received the first order for which $9.80 was paid.

The first money paid for publicity of any kind was in 1918 when $16.00 was paid the Tribune Printing Company. That year $300 was paid for printing and selling bonds; and Robert E. Barber, the present attorney' for the board received $75 for legal services. This was at the time that the present site at Berkley Avenue and Catalpa Drive was bought.

Beginning in 1918 we began to broaden out -- three teachers being employed. This is certainly a contrast to our present day school system with a faculty of 302 teachers.

This was written over thirty years ago, which accounts for the fact that people mentioned (Mrs. Sullivan and her sister, Clara Erb Kidder, Mabel Baldwin.. etc.) have since passed away. Miss Shotwell was the school nurse. The old frame schoolhouse on the northeast corner of Eleven Mile and Coolidge was remodeled into what was named "The Dormitory" in 1919 as I remember, at a time when the district was trying to force the teachers to live there. After two years it was proven unsatisfactory and the five girls were no longer made to live there. It wouldn't have lasted that long if it had not been that one of the girls -- raised on a farm n could operate a gasoline engine that pumped the water. The drinking water had to be carried down daily from the Berkley grade school as none of the teachers owned a car. 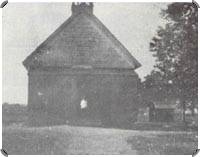 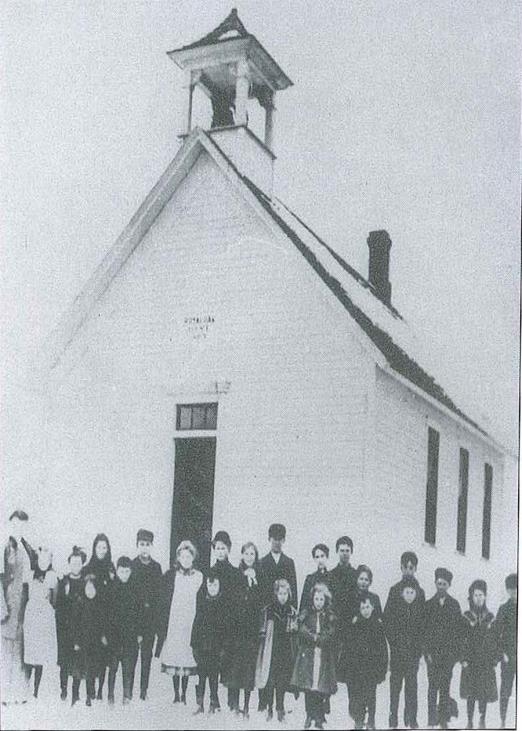 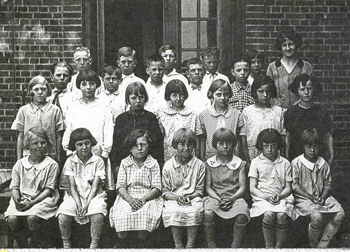