Board of Education Recognizes Student Athletes at November Meeting 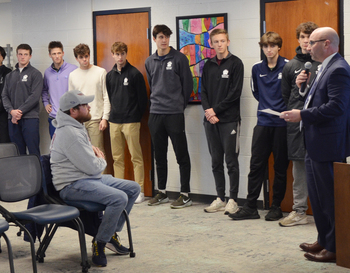 Board of Education Recognizes Student Athletes at November Meeting

On Monday, November 14, the Berkley Board of Education honored student athletes for their outstanding accomplishments at their Regular meeting.

The Board recognized the BHS Boys Soccer team and a member of the Cross Country team.

Under the guidance of coach Steve Wloszek, the BHS boys soccer team was ranked #3 in Division 1 in the state and #44 in the nation during the season. The team set a school record for wins in a season (20), fewest goals against the team in a season (10) and didn’t allow a single goal in all non-league games. This team also achieved All-State Academic status for having a combined GPA average over 3.3. In addition, the team set the school record for wins in a season with 20 (previous record was 19 in 2018 and 2005).

The Board recognized BHS senior Matthew Short, for qualifying for and participating in the Division 1 Cross Country State Meet at the Michigan International Speedway. Matthew was also the Division 1, Region 7 champion, was a member of the team that claimed the first Berkley League Championship since 2016, and was named All-OAA. While Matthew was unable to attend the meeting, his coach Jared Purcell attended to share about Matthew’s accomplishments.